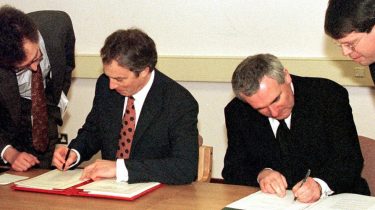 Over 250,000 military personnel served in Northern Ireland during Operation Banner, the longest continuous deployment of troops in British military history.

Between August 1969 and July 2007, 1,441 military personnel died as a result of operations there, 722 in paramilitary attacks. During the same period the British military were responsible for the deaths of 301 people, over half of whom were civilians.

In total, around 3,520 people were killed during the Troubles. Here we examine how armed forces personnel were, and continue to be, prosecuted for the fatalities.

Military law and the rules of engagement

Military personnel are subject to both service law and civilian law, wherever they are serving in the world.

For every military operation, personnel are issued with specific rules of engagement which establish the circumstances and limitations under which personnel can use armed force. The rules depend on the operation being undertaken and are intended to help commanders and soldiers stay within the law or under any relevant political restraints. The rules have no legal force.

The rules of engagement for personnel serving in Northern Ireland from 1969-2007 were contained in ‘the yellow card’. The original version of the card, with 21 rules, was considered too detailed and complex, and was amended in 1980 to contain just six. Among them was the directive that only the minimum force necessary was to be used and that firearms should only be used as a last resort. The card’s wording was amended again in 1994.

How were armed forces personnel prosecuted during the Troubles?

Any fatalities involving the armed forces were investigated by the Royal Ulster Constabulary (RUC).

In most cases fatalities were a direct result of operations and “centred around the key issue of whether the soldier had the right to open fire in the particular circumstances pertaining at the time.” This resulted in a number of convictions, although in the majority of cases the Director of Public Prosecutions for Northern Ireland directed that there was no case to answer, or the defendants were acquitted at trial.

The role of the Good Friday Agreement and On the Runs

The 1998 Good Friday Agreement made no provision for the investigation or prosecution of former members of the armed forces. Instead it focused on the early release of prisoners affiliated to paramilitary organisations. It did not provide an amnesty for crimes for which people not yet been prosecuted.

From 2000 to 2014, the UK government operated an administrative scheme by which individuals suspected of terrorism crimes in Northern Ireland, but not in custody – so-called On the Runs – were issued with letters of assurance that they were not of interest to the prosecuting authorities.

The collapse of a trial in 2014 against John Downey, suspected of the 1982 Hyde Park bombing, as a result of previous assurances against prosecution, led to a judge-led review of the scheme. The report of that review criticised the scheme for systematic failings and emphasised that ‘letters of comfort’ to On the Runs did not constitute an amnesty or immunity from prosecution.

How are deaths related to the Troubles investigated?

In 2006 the Historical Enquiries Team (HET) was set up by the government as part of the Police Service of Northern Ireland (PSNI). HET examined all deaths attributable to the security situation that occurred in Northern Ireland between 1968 and The Good Friday Agreement. These cases were mostly examined in chronological order.

HET was set up in response to European Court of Human Rights (ECHR) judgments related to the investigation of deaths with alleged state involvement. The judgments found breaches of Article 2 of the European Convention on Human Rights relating to the right to life.

In 2012 the Minister of Justice for Northern Ireland commissioned Her Majesty’s Inspectorate of Constabulary (HMIC) to inspect the role and function of the HET.

HMIC’s report was highly critical of the HET and in 2013 the PSNI announced it would review all military cases from 1968 up until the Good Friday Agreement was signed, in order “to ensure the quality of the review reached the required standard.”

As a result of budget cuts to the PSNI, the HET was disbanded in September 2014. In its place a much smaller Legacy Investigations Branch (LIB) was formed. The LIB continues to review all murder cases linked to the Troubles. It looks at forensic opportunities, available witnesses and other investigative material when deciding which cases to tackle first – rather than chronological order.

Any decision by the LIB to prosecute is referred to the Director of Public Prosecutions for Northern Ireland. The Ministry of Defence and the British government is entirely independent of this process.

There has been significant criticism, on all sides, of the process by which legacy investigations have been, and continue to be, undertaken. Concerns have been expressed over the credibility and reliability of evidence, 40+ year-old witness statements and the re-opening of investigations that had already concluded. Most notable has been the widespread perception that investigations have disproportionately focused on the actions of the armed forces and former police officers, which account for 30% of the LIB’s workload but form 10% of the overall deaths during the Troubles.

What recent prosecutions have taken place?

The Public Prosecution Service for Northern Ireland has stated that of the 26 prosecution cases brought since 2011, 21 have involved republican and loyalist paramilitaries. Five of those cases are currently ongoing.

To date, six military personnel have been charged with offences related to the Troubles, including one former soldier (known as ‘Soldier F’), who is being prosecuted in relation to the events of Bloody Sunday.
Claire Mills is a Senior Library Clerk at the House of Commons Library, specialising in the armed forces and defence. The issues in this article are examined in depth in the House of Commons Library research briefing: Investigation of Former Armed Forces Personnel Who Served in Northern Ireland.