5 reasons why Node.js is a perfect Enterprise App Development platform 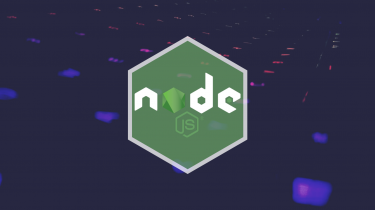 Node.js provides a robust server environment for companies to develop web apps swiftly and securely. In a world where taking quick decisions and actions is the key to achieving success in business, Node.js proves to be an excellent platform for developing enterprise applications

Key points of Node.js as a Platform

Node.js is an open-source platform which can essentially run JavaScript codes outside a web browser. With developers writing command-line tools which then run server-side scripts, Node.js can efficiently produce dynamic web page content even before the page reaches the user’s web browser.

Using asynchronous programming and implementing push technology over web sockets in the real-time web applications, Node.js has been able to transform the process of web & request-response. Now, the server and clients can freely communicate and exchange data and enjoy an unrestrictive two-way connection. Developers can share the same piece of coding with the client and server side through Node.js’ asynchronous programming.

According to a survey held back in 2019, Node.js was deemed as the most popular platform among developers in the category of “Frameworks, Libraries, and Tools”. According to a user survey held for Node.js users, more than 40% of Node.js programmers use this platform to develop enterprise apps. A majority of developers of this percentage were surprisingly working for Fortune 500 companies. With numerous companies claiming that Node.js increases developer productivity, the number of downloads of this platform is steadily increasing by a whopping 40% every year.

Before delving into the detailed reasons as to why enterprises should hire a Node.Js/ React.Js Development Company for their next app project, let us look at some quick benefits of using Node.js as a platform:

5 main reasons why enterprises should consider Node.js as their app development platform

Node.js provides you with several benefits to prove its case as one of the best platforms for enterprise app development. Here are five top reasons as to why you should consider Node.js for developing speedy and efficient enterprise applications:

One of the main reasons why companies time and again comes back to Node.js as their preferred platform of app development is due to its ability to build cross-platform desktop apps. Node.js allows users to use platforms such as Electron and NW.js, and make desktop apps that work with any kind of operating system.

Developers, who might not be skilled in languages such as Objective-C, Swift, Java that are used to build native apps, can still create web and desktop apps with the help of Node.js. These developers can reuse their codes from their web applications and implement it on desktop applications which have compatibility with Windows, Linux, and macOS.

Node.js dismisses the need for a Mac machine to build macOS applications or Windows machine for building Window apps with its developer tools. Every significant developer tool which is related to Node is cross-platform. Moreover, Node.js allows its users to get exclusive access to Google Chrome Developer Tools which ultimately gives them all the necessary equipment to debug efficiently and provide better desktop versions of the application.

The platform is essentially based on V8 runtime of Google Chrome which is written in C++ and which overall, acts as a major advantage for the programmers. They can build applications which are compatible with several operating systems at a time without necessarily re-coding for every new OS. Moreover, both the Node.js platform as well as Google’s V* receive regular updates for utmost optimization of their performances.

Node.js can easily manage multiple server connections simultaneously due to its single-thread architecture. Thus, the platform will not create any additional threads for each new request that it gets. This not only makes the app operate faster but also prevents excessive usage of RAM.

The Node.js platform provides its users with a long-term support feature which, according to a survey held in 2018, more than 60% of developers deems to be important. With the IT world’s fickle nature and dynamic changes, it is not a surprise to see technologies falling apart before they could even offer LTS. Node.js is equipped to counter this trend and provides its users with consistency with its support and updates.

For enterprises who are dwelling over the privacy and security concerns over their app development platform, the Node.js platform provides an enterprise version of its Npm. Npm offers a range of benefits to the users. From installing and using small modules to identifying and replacing unsafe code, the enterprise version of npm can improve the developmental process of enterprise apps to great extent. This feature by Node.js was widely acclaimed by developers worldwide and is still growing in terms of its operations and abilities.

While these were only five reasons, Node.js provides several reasons for companies to consider developing their apps on this platform. Node.js facilitates seamless development of apps without adding any kind of complexities. With its fast-paced V8 engines and single code base, Node.js consists of all the prerequisites necessary for developing and deploying comprehensive enterprise apps.

James Grills is a marketing advisor – currently associated with Cumulations Technologies, a Flutter App Development company. He is a technical writer with a passion for writing on emerging technologies in the areas of mobile application development and IoT technology.