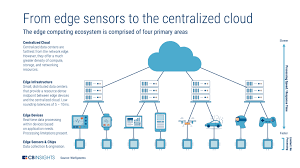 IoT (Internet of things) is a diverse system of devices and sensors connected to the internet and at the same time is one of the fastest-growing industries of our time. It goes beyond devices you would traditionally expect to be online, like laptops or smartphones, to include a wide range of everyday objects, such as cars, TV sets, thermostats, smoke alarms, fridges, toasters and much, much more.

It is estimated that there will be more than 65 billion IoT devices plugged into this network by the year 2025, compared to just 7 billion in 2018. The problem with this growth is that IoT devices generate a colossal amount of data (expected to reach 4.4 zettabytes a day in 2020), but at the same time they normally possess very little computational power.

In essence, these objects work at the very edge of the IoT network and act as mere information-gatherers that need some sort of external, centralized support system that will provide them with necessary technical resources and infrastructure. This is where cloud computing comes in.

The first question that probably comes to mind is “how do we store this amount of data?” Instead of storing it in the very device, which would make it much more complex and expensive, it’s more reasonable to “rent” this digital space from external servers.

In this sense, IoT and cloud technology together enable us to deal efficiently with big data. Here, IoT serves as a source of info while the cloud provides the means to gather all the obtained data in one place.

The importance of processing power

However, the cloud is more than just a storage unit. In order to make sense of the dispersed pieces of information gathered through a number of devices at the edge of the system, this information needs to be effectively processed and analyzed.

The processing power is what makes smart devices truly smart – without it, we would end up with just a huge pile of completely useless tiny fragments of data with no real connection. So, the cloud doesn’t only lend storage space to the IoT, but it can also lend its computational capabilities to devices, as well as businesses in this industry in general. In other words, the integration of previously scattered and relatively unstructured data happens in the cloud.

Take the use of IoT and cloud in CRM software for instance. Huge and robust CRM systems wouldn’t be effective at all if customer behavior would be simply represented by a series of unrelated single actions. Different IoT devices can supply the system with raw data, but in order to detect patterns and predict trends in customer intent, it’s necessary to sift through these data using numerous parameters. Of course, cloud technology can provide substantial computational resources needed for this task.

How much speed is enough speed?

Naturally, all this means that processing information in a quick and timely manner is much easier when cloud computing is employed. This especially goes for those cases where an organization or a business needs to collect and analyze a large amount of data from geographically dispersed locations in a matter of seconds.

However, it’s important to have in mind that even this is not quick enough for some applications of IoT. Although the communication between the device and the cloud is swift, it’s not instant. This may not be too important for a smart fridge that’s supposed to remind you to buy more lettuce, but it can be crucial in traffic or in medical usage. If a reaction to heart failure or traffic danger is just a few milliseconds late, it can make a difference between life and death.

Having a centralized security system that takes care of all the devices at the edge of the system has its benefits. For example, in case of a breach or some other security problem with one device, the system can recognize it and immediately take appropriate measures to protect all the other devices in the network from similar problems. Cloud technology offers a platform on which such a security system can operate.

Furthermore, the cloud can provide you with space to store a large amount of various biometric data, which play a big role in the world of cybersecurity nowadays. Nevertheless, big centralized systems working with the help of the cloud can also be quite vulnerable due to their robustness, so it’s all a kind of a two-edged sword. As much as 84 percent of organizations that have adopted IoT have also experienced an IoT-related security breach, so there’s definitely room for improvement here.

Another advantage of implementing cloud computing in IoT networks is financial flexibility. On the one hand, this comes as a logical consequence of cloud being able to offer cheap storage and processing power, but the cost-effectiveness of it goes beyond that.

SEE ALSO: 10 best practices for using DevOps in the cloud

It’s not unusual that businesses have varying demands at different times. This means that there’s a danger that, for instance, pre-bought storage may turn out to be insufficient or excessive. Naturally, both options are bad for business. With cloud technology, organizations have the opportunity to pay the cloud provider for exactly the amount of resources that they used, thus staying efficient and reliable at the same time.

In essence, cloud computing is what gives life to the IoT world. The relationship between the two will become increasingly important in the times to come, given the huge rise in the amount of data that devices gather and we as end users generate.

Efficient analysis of this enormous body of information will be crucial for the improvement of IoT devices, systems and the IoT network as a whole. It will also give rise to new opportunities in this field and open the space for entirely new applications. Despite the drawbacks and obstacles such as those with security and privacy, cloud computing is still by far the most preferable solution for the growing industry of IoT