5 Key Skills Developers Need to Master in Order to Thrive 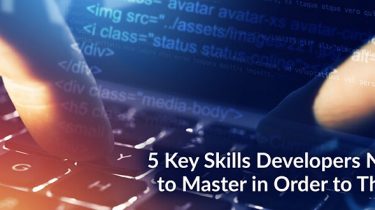 Source:-devops.com
The promise of the cloud, in its essence, allows the IT department to focus on generating business value rather than spinning cycles fixing and managing infrastructure. However, the cloud is not a one-size-fits-all proposition, and many early adopters are finding it challenging to move to the cloud. There are well-documented cases of huge budget overruns, far in excess of prior on-premises costs, making estimating costs in the cloud versus the status quo a key skill of any C-level IT executive nowadays.

This has ushered in an era of microservices and cloud-native applications. The symbiotic relationship between the two has enabled new architectural patterns such as microservices, while the cloud itself has enabled cheap experimentation and throwaway infrastructure. This means developers today can focus less on the infrastructure itself and more on dedicating additional resources, time and skills to iterating and deploying new code, which was traditionally only available to big organizations with limitless budgets. In addition, this evolution has created opportunities for a crop of new developers who come from non-traditional IT backgrounds to supplement the tech skills gap that’s currently crippling the industry.

Here are five invaluable skills I believe every developer, whether just entering the workforce or currently in it, should cultivate.

This goes without saying, but developers today must be polyglots. Ten years ago, a developer would only have to reason about one process, in one language, connecting to a database. Today, with the advent of microservices, there are many different stores of data and many applications, written in many languages, that all need to coordinate with each other over the network.

Different development teams are generally responsible for their own microservices, which in turn interact with other teams’ microservices. Careful thought is required when designing APIs through which they interact. Backward compatibility, availability and graceful failure all become crucial design decisions.

More than ever, adaptability is a key skill. In the past, developers might only have needed to learn one language and one database, and chances are that skill set would have been all they needed throughout their entire career. Today’s developer will know Java (which is still by far the most popular back-end language), but the rise in newcomers such as Go is driving the development of a new wave of cloud-native software, such as Kubernetes and Docker. It’s critical that developers keep up with new languages and database technologies.

Communication is vital. Traditionally, developers have not been known for their communication skills, but with distributed teams and developers working from home becoming more common, working in isolation is no longer an option.

Because of these changes, it’s easy for a developer to become overwhelmed, which is why it’s also important to learn how to schedule time and how to be able to look after oneself physically. Taking breaks, sleeping well and exercising regularly is vital to preventing burnouts.

Always Look for Ways to Improve Your Technical Skills

It’s now easier than ever to improve your technical skills. The most important technologies are open source, meaning you can download everything you need and learn at your own pace. Many online videos and other materials can be leveraged as well; you no longer have to wait for your employer to approve funding for training.

But crucially, the easiest way to pick up technical skills is to practice them in a business setting. This may mean moving jobs to find the right fit. Another way to become familiar with how distributed teams work is to contribute to an open source project. You can contribute to these projects in many different areas, not just coding. Contributing to documentation, for example, is an area that offers a low barrier to entry.

Humility is a key requirement, because teams that cannot come to a consensus are doomed to failure. It is no use having an intransigent individual who will insist his or her ideas are best; you will waste many hours coming to conclusions with such people. Quite often, hiring a rocket scientist into your team can upset the entire balance.

Don’t Be Afraid to Ask Questions

One particular incident very early on in my career demonstrated another key skill: Never be afraid to ask questions, even if it is the same question you’ve asked previously. At the time, I was working as a mainframe operator for a book sales company. All of the day’s orders were stored in volatile memory; at the end of the day, they would be applied to a batch process that would calculate stock, print invoices and send instructions to the warehouse for customer book deliveries. This was in the time before the internet, so orders were entered manually by the data entry team who worked through order forms sent in the mail. Approximately five people entered these orders, and they usually totaled around 100-200 a day.

I was working on overseeing the batch process that night and was a few weeks into the job. There was an initial step in the batch where manual input was required to start it. However, I encountered an error message and it offered a number of options with increasingly cryptic descriptions. I had no idea which option to choose. Rather than ask the senior person working with me, I simply made a guess. The option I chose ended up wiping the volatile memory holding all the day’s orders. While this caused the company to lose a significant amount of money, I learned a vital lesson: Never, ever guess and always ask for help.

Developers are today’s innovators. With the advent of the cloud, concerns around infrastructure are minimized. In most cases, platforms to run an organization’s business software will already be available. The days of a developer having to worry about selecting a database and working out sizes of servers will be gone. Instead, a developer’s key skill will be in writing the business software and identifying which cloud platforms to use in order to deliver it. Armed with that knowledge and the desire to keep learning, today’s new wave of developers will only become more adept at delivering value over existing business processes.