DevOps is More Than Just Automation 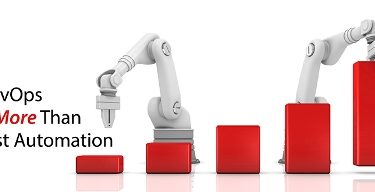 DevOps is a lot of things. What DevOps is, what DevOps does and how an organization adopts and implements DevOps tools and practices are largely subjective, but there are some foundational elements that are fairly ubiquitous. One of which is automation. As pervasive as it is, though, DevOps is not automation and automation is not DevOps.

The Preface of “The DevOps Handbook” lists a number of prevailing myths about DevOps, including the idea that DevOps is just “infrastructure as code” or automation. The book goes on to explain:

While many of the DevOps patterns shown in this book require automation, DevOps also requires cultural norms and an architecture that allows for the shared goals to be achieved throughout the IT value stream. This goes far beyond just automation.

I prefer a golf analogy. If DevOps is the game of golf, then automation is like the putter. The game itself may be played for different reasons by different individuals—exercise, competition, just to get out and enjoy nature—but the fundamentals are the same no matter what the ultimate goal is. There is a wide variety of clubs available and strategies that can be employed to get the ball from tee to green, at which point the putter is somewhat indispensable. It is technically possible to tap the ball in using some other club, but everyone will agree that the putter is the best tool for the job. As necessary as a putter may be, though, the putter is not golf and golf is not the putter.

The important thing to remember is that automation is simply a tool or method for achieving the goal. It, like any other facet of DevOps, has to be part of a broader cultural shift and mindset.

It was about a year ago that I theorized that microservices could make the “Ops” in DevOps obsolete. If everything—infrastructure included—can be implemented in code and automated, will we still need people to be involved? The answer then—and now—is yes, because DevOps is about more than just automation. Its evolution is to one of enabler rather than job-killer. As more functions are automated, people can focus on bigger and deeper issues and create new innovations instead of focusing on mundane, repeatable tasks.

I can’t imagine why anyone would want to do DevOps without automation, though. It wouldn’t make any sense—like trying to look at the stars without a telescope, or sink a golf ball from 18 feet with an 8-iron. Although DevOps is more than just automation, the most effective and efficient way to succeed at DevOps is to automate everything that can be automated so you can stay focused on the big picture.