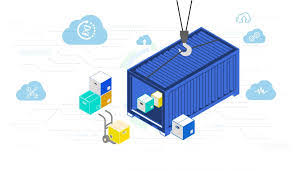 This implies that cloud containers are far more lightweight as they efficiently share the operating system kernel, start much faster, and utilize a fraction of the memory compared with booting an entire operating system.

Cloud container as a service (CaaS) provides a software developer with the potential to build predictable environments that are entirely isolated from other applications.

Containers can also contain different software dependencies required by the application, such as particular versions of programming language runtimes and other software and source code libraries. From the software developer’s perspective, all this is ensured to be consistent no matter where the software/application is finally deployed.

Cloud container as a service (CaaS) enables organizations to enhance business productivity. By acquiring such advanced services, IT operational team and software developers spend less time in detecting and debugging errors in environments, and more time in implementing new functionalities in the system.

Case-based solutions offer a broad range of efficient services, including load balancing scheduling capabilities and computing models. It is extremely simple to scale up a container using Cloud container as a service (CaaS).

Retail and Consumer Goods
Healthcare and Life Sciences
Manufacturing
Media, Entertainment, and Gaming
IT and Telecommunications
Transportation and Logistics
Travel and Hospitality
Other
Within the broad spectrum of cloud computing services, CaaS falls somewhere between platform as a service (PaaS) and Infrastructure as a service (IaaS). However, CaaS is generally considered as a subset of IaaS.

Factors such as an increasing number of IT organizations and the presence of some leading cloud service providers and software developers are expected to increase the demand for efficient CaaS services. These two regions are expected to offer a considerable contribution to the growth of cloud container as a service (CaaS).

Cloud service providers are focusing on enhancing their offerings by improving the quality and efficiency of CaaS-based solutions.

Docker is an advanced containerization software that performs OS-level-virtualization. The design and development of this software were done by Docker, Inc.

Docker was first released in the year 2013. The software is implemented in ‘Go’ programming language.

It’s an excellent and freemium software as a service and possesses Apache License 2.0 as the source code license.