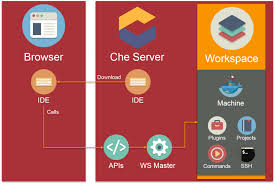 Oracle wrapped up its annual OpenWorld and Code One events in San Francisco on Friday, ending a week filled with of Java- and Cloud-focused announcements from Big O and the 350+ vendors exhibiting at this literally traffic-stopping user conference.

The big news for Java developers at this year’s show was the release of the Java Standard Edition 13 Platform (Java SE 13) and its open-source reference implementation, the Java Development Kit 13 (JDK 13). Another big Java-related announcement came from the Eclipse Foundation, which released the Eclipse Che 7 in-browser IDE at the show, making good on its promise to couple Java and Kubernetes more tightly

The Foundation bills Che as the first developer workspace server and IDE for creating cloud-native enterprise applications on Kubernetes. It’s designed to simplify writing, building and collaborating on cloud-native apps for teams by abstracting away many of the complexities of Kubernetes and closing the gap between development and production environments.

“Che is the first IDE built with the needs of Kubernetes developers in mind,” Milinkovich told ADTmag. “What’s exciting about Che 7 is that it has been architected to be natively Kubernetes-hosted, and there’s a ton of productivity benefits you get from that.”

Che 7 aims to eliminate local-environment configurations and provide developers with “one-click workspaces,” Milinkovich said. It makes the developer and production environments the same on a scalable, collaborative, and secure platform specifically designed for building containerized apps.

“Every technology has a lifespan,” he said, “including desktop IDEs, like Eclipse and IntelliJ, where made perfect sense when most developers were working on a single, cohesive platform. Back when I started at Eclipse 15 years ago, developers were building for Java within a sort of a constrained set of technologies that defined the application infrastructure they were targeting. But in today’s full-stack world, there are very few applications that don’t mix, say, Java and JavaScript, for example. There are different container technologies and orchestration models out there, there’s much more variety in the Java world in terms of frameworks, and it almost seems like there’s a new JavaScript framework every week. It has become impractical for developers to have to reconfigure their IDEs for each new framework as they move from project to project. I’ve seen studies suggesting that it takes up as much as 25% of developers’ time.”

Che 7 comes with a pre-packaged, web-based IDE based on an extended version of Eclipse Theia to provide “an in-browser Visual Studio Code experience,” the Foundation said in a statement, adding, “Eclipse Che and Eclipse Theia are already integral to cloud native solutions from vendors such as Google, IBM and Broadcom, among others. It comprises the core of Red Hat CodeReady Workspaces, for example, a new development environment for Red Hat OpenShift.”

“With Che 7, everything a cloud native developer needs — including the IDE, its plugins, and their dependencies — is running as a Kubernetes application, so everything becomes repeatable and reproducible,” said Brad Micklea, vice president of Red Hat’s Developer Tools and Programs group, in a statement, “whereas before development teams had to spend a non-trivial amount of time building and maintaining developer environments. Now developers can more quickly spin up a development environment in Kubernetes that mirrors a production application, and Che will take care of adding the development, build and debugging tools needed for them. Anyone, anytime, can contribute to a project without installing software, thus enabling faster application development from a more secure, centrally hosted environment.”

Che is the culmination of more than six years of community contributions, Milinkovich said, including more than 20 vendors.
John has been covering the high-tech beat from Silicon Valley and the San Francisco Bay Area for nearly two decades. He serves as Editor-at-Large for Application Development Trends (www.ADTMag.com) and contributes regularly to Redmond Magazine, The Technology Horizons in Education Journal, and Campus Technology. He is the author of more than a dozen books, including The Everything Guide to Social Media; The Everything Computer Book; Blobitecture: Waveform Architecture and Digital Design; John Chambers and the Cisco Way; and Diablo: The Official Strategy Guide.