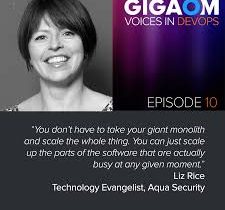 Voices in DevOps – Episode 13: A Conversation with Gareth Rushgrove of Snyk

Source:-gigaom.com Guest Gareth Rushgrove is a Director of Product at Snyk, working remotely from Cambridge, UK, helping to build interesting tools for people to better secure infrastructure and applications. He has previously worked for the UK Government Digital Service focused on infrastructure, operations and information security, as well as at Puppet and Docker. When not working he can be found curating the Devops Weekly newsletter, hiking or reading a good book. Transcript Jon Collins: Hello and welcome to this episode

DevOps will make the government more efficient. But what actually is it?

Source – fedscoop.com The problem with buzzwords is that they tend to accumulate a diversity of definitions depending on the user. So when Red Hat’s Josh Ranoa opened his “Open Innovation: Make DevOps a Reality” panel at the company’s recent Government Symposium by asking panelists to define DevOps, it seemed an interesting, if basic, starting point. What the audience learned moments later, though, was actually quite intriguing. That’s because every panelist, each involved in some way in bringing the increasingly popular DevOps practices to their respective agencies, defined the