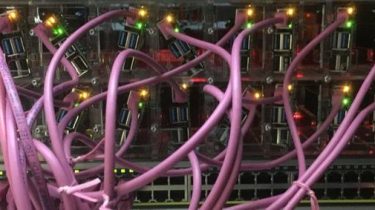 A cluster of Raspberry Pi 4 computers costing less than $1000 was used to host much of the official raspberrypi.org website during its busiest ever day.

The newly released 4GB Pi 4 costs $55, a fraction of the cost of traditional server hardware, but is also less powerful and offers less memory than entry-level servers. Mythic Beasts, the ISP that hosts the Raspberry Pi website, created an 18-board Pi 4 cluster to host much of the site and found it handled record demand on the day of the Pi 4’s launch without issue.

“In hindsight we over-specified our cluster – we only really needed about four Pi 4s to do all the WordPress pages (plus two for static content and two for memcache).”

Altogether the cluster offered 72 compute cores and 72GB of DDR4 RAM, with Mythic Beasts saying it consumed less than 100W and could fit into 1/2U of rack space, adding “server manufacturers should start getting scared”.

The Pi 4 is significantly better at handling website traffic than earlier Pi boards, with additional memory, about 2.5x the performance of the Raspberry 3 B+, and true Gigabit Ethernet.

Stevens says Pi 4 boards are suited to being run as individual dedicated servers, at a price comparable to running a virtual machine, and to being combined into computing clusters.

Providing a computing workload can be split into tasks that can be handled in parallel, a large number of slow CPUs can be as effective as a small number of fast CPUs, he says.

While previous attempts to offer Arm-based servers have not made a significant dent in Intel’s market share and others say there are still sizeable roadblocks to real-world deployment, Stevens points to the eventual triumph of “good enough” technology.

“History repeats, Microsoft and Linux won over DEC, Sun, IBM, HP, SGI by being cheap and good enough and steadily getting better,” he says.

Image: Mythic Beasts
There are some caveats, however, as not everything related to the raspberrypi.org site is hosted on the Pi 4 cluster.

“We haven’t moved the entire stack to the Pi 4. The front-end load balancers, download and apt servers are still on non-Pi hardware,” said Stevens in a blog post, although he said “the Pi 4 hardware looks well-suited to taking over these roles too”.

At present, a key issue stopping Mythic Beasts from hosting more of the site on a Pi 4 cluster is the lack of support for booting the Pi 4 over network-attached storage, which is due to be added to the Pi 4 by a later firmware update. For that reason, Mythic Beasts has held off on moving the databases for the site to the Pi 4 until the cluster can have “mirrored storage on enterprise SSDs with high write reliability and long write lifetimes”, rather than the existing SD card storage.

Stevens says the firm even hopes to host the most traffic-intensive part of the raspberrypi.org site on the Pi 4.

“The majority of the traffic comes from the operating system downloads which is still currently on Intel hardware,” he says.

“We think we can move this to the Raspberry Pi 4 relatively easily, however at present our Power Over Ethernet switches only have 1Gbps uplinks (which was fine for Pi 3) so we need to do some network redesign and upgrades before we can deploy Pi 4 as content servers – they’re just too fast for our Pi 3 cloud design.”

It’s also worth noting that raspberrypi.org was down for a period during the Pi 4’s launch day, although this was related to the Cloudflare outage that also took down Amazon and Facebook sites and services. Mythic Beasts says that Cloudflare services are used to accelerate delivery of content for raspberrypi.org.