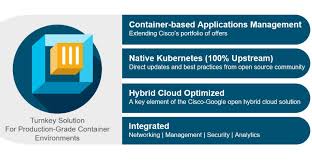 Cisco seeks to enhance container deployment with a service to let enterprise customers run containerized applications across both Cisco-based on-premises environments and in the Microsoft Azure cloud.

Specifically, AKS has been added to Kubernetes managed services that natively integrate with the Cisco Container Platform. Cisco introduced its Kubernetes-based Container Platform in January 2018 and said it allows for self-service deployment and management of container clusters.

Cisco has added multivendor support to the platform, including support of SAP’s Data Hub to integrate large data sets that may be in public clouds, such as Amazon Web Services, Hadoop, Microsoft or Google, and integrate them with private cloud or enterprise apps such as SAP S/4 HANA.

Cisco has been working to further integrate with Azure services for quite a while  now.  For example, the Cisco Integrated System for Microsoft Azure Stack lets organizations access development tools, data repositories, and related Azure services to reinvent applications and gain new information from secured data. Azure Stack provides the same APIs and user interface as the Azure public cloud.

In future phases, the Cisco Container Platform will integrate more features to support Microsoft Windows container applications with the potential to leverage virtual-kubelet or Windows node pools in Azure, Compton stated. “In addition, we will support Azure Active Directory common identity integration for both on-prem and AKS clusters so customer/applications experience a single consistent environment across hybrid cloud.”

In addition, Cisco has a substantial portfolio of offerings running in the Azure cloud and available in the Azure Marketplace.  For example,  the company offers its Cloud Services Router, CSV1000v, as well as Meraki vMX, Stealthwatch Cloud, the Adaptive Security Virtual Appliance and its Next Generation Firewall.

The package, Cisco Hybrid Solution for Kubernetes on AWS, combines Cisco, AWS and open-source technologies to simplify complexity and helps eliminate challenges for customers who use Kubernetes to enable deploying applications on premises and across the AWS cloud in a secure, consistent manner.  The hybrid service integrates Cisco Container Platform (CCP) and Amazon Elastic Container Service for Kubernetes (EKS), so customers can provision clusters on premises and on EKS in the cloud.

Cisco and Google have been working closely together since October 2017, when the companies said they were working on an open hybrid cloud platform that bridges on-premises and cloud environments. That package, Cisco Hybrid Cloud Platform for Google Cloud, became generally available in September 2018. It lets customer develop enterprise-grade capabilities from Google Cloud-managed Kubernetes containers that include Cisco networking and security technology as well as service mesh monitoring from Istio.