Top DevOps tools that you must use in 2019 and beyond 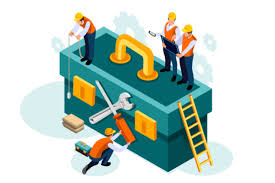 DevOps continues its steady growth throughout 2019 and beyond. Here are some highly recommended tools for you and your team to check out and implement into DevOps strategies. Find out exactly what you need for your specific use cases and goals. Have you tested them out? Finding the best DevOps tool is something that will take some experimentation and testing.

Like previous years, DevOps is predicted for healthy growth in 2019 and beyond. In fact, IDC, the premier global market intelligence firm, has forecasted the globe DevOps software market to reach will reach $8 billion by 2022, which is an increase from $3.9 billion in 2017.

Let us read about some Top DevOps tools you need to try in 2019.

A forerunner in containerization, Docker is regarded by many as crucial to DevOps as Photoshop to image editing and Word to writing. It automates application deployment provides integrated container security and agile operations for legacy and cloud-native applications. One of the best things about Docker is that it can package dependencies. That means dependency management is not a concern with it.

In addition to these advantages, Docker facilitates an automated, secure supply chain for reducing time to value. It supports existing as well as new applications and goes well with AWS and Google Cloud. A turnkey enterprise-ready container platform, Docker makes distributed development easy. The biggest benefit of Docker is that it effectively and smartly isolate apps into separate containers and thus make them more secure and portable.

Easily integrable with Bamboo and Jenkins, Docker also helps in stimulating massive improvements to delivery workflows. If you are looking for a powerful tool to ease the otherwise-complicated process of cloud migration, Docker is the tool for you.

Kubernetes, a container orchestration platform, is best known in the world of DevOps for taking containerization to a completely different level. Using this platform, users can easily group their containers into logical units. It is an excellent DevOps tool for every business that wants to streamline its operations after reaching a specific level of complexity and scale its resources.

One of the best things about Kubernetes is that users don’t have to associate their containerized applications to a single machine. Instead, they can easily deploy the applications to a group of computers. In other words, Kubernetes automates the scheduling and distribution of containers across the entire set of groups. Vital for large projects, this DevOps tool is best to streamline complex projects across big teams and can deploy to a set of computers through automated distribution.

A popular solution developed on GitHub, TypeScript is ideal for large applications with robust components. Primarily, it is used by developers to leverage interfaces, libraries, and complex code. TypeScript works with any JavaScript host that provides support ECMAScript 3 and newer environments. This DevOps tool has the unmatched ability to increase efficiency when coordinating workflows and JS libraries.

One of 2019’s top DevOps tools, Gradle Build Tool was selected by none other than Google as the official build tool for Android Studio. This easy-to-use tool helps developers write code in a wide range of programming languages such as C++, Python, and Java. Rated as a heavyweight in the context of software building, Gradle Build Tool is 100X faster when compared to other tools such as Maven.

This useful DevOps tool is a hit with developers because of its features such as task output caching, incremental build option, and incremental subtasks. These features help developers execute tasks from multiple workstations and make changes to their apps easily.

One of the most popular DevOps tools, Git is extremely popular across the software industry. This distributed source code management (SCM) tool is appreciated primarily by open source contributors and remote teams. By using this tool, users can easily track the progress of their development work. Furthermore, they can easily save different source code versions and return to any previous version if required. The best thing is that Git is extremely useful for experimentation purposes as users can quickly create separate branches and proceed to merge advanced features only when they are all ready to go.

Git can easily integrate with DevOps workflow by hosting repositories where the team members share their work. Presently, the two best Git repository hosting services are BitBucket and GitHub. Both of them come with fantastic integrations. For instance, users can integrate them with Slack. Everyone on the team gets a notification whenever someone makes a new commit.

A cross-platform configuration management platform, Puppet Enterprise lets you manage your infrastructure as code. Users can deliver software more securely and faster with Puppet Enterprise as it automates infrastructure management. It also assists developers with an open-source tool for small projects. Users may find value in the extra features of Puppet such as Node Management, role-based access control, and real-time reports if they’re dealing with a larger infrastructure.

Which DevOps tools are right for your team?

Finding the best DevOps tool is something that will take some experimentation and testing. Generally, it will take some time before you can identify, set up, and implement open-source tools. You can get free trials with a majority of commercial DevOps tools that will come handy to test and evaluate them without putting any burden on your pocket. Finally, it all boils down to your needs and goals. Good luck!Be the first to share this article with your network!redditTwitterFacebookGoogle+Author