THE POWER OF CLOUD COMPUTING & AI ARE ACCELERATING DRUG PRODUCTION 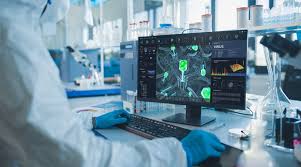 Microsoft, Google, and AWS are collaborating with pharma firms to develop drugs fast & cheaply with AI and Cloud Computing.
Hospitals and health care providers are using cloud service and AI for digital transformation. COVID-19 pandemic has seen the rapid adoption of telemedicine and healthcare chatbots that use artificial intelligence and machine learning. To further the course of digital transformation, pharmaceutical companies are employing the cloud to polish their business operations in fundamental ways.

This is called computational drug discovery.
It uses a combination of cloud computing and AI to make the process of drug development faster and cheaper. Big drug companies are taking complete advantage of the advancements in artificial intelligence and the computational capabilities of the cloud to test this new method,

Many pharma companies are using this tech-driven approach to develop traditional medications along with new categories of drugs that work at the DNA and RNA level to stop diseases. Hyperscale cloud providers like AWS, Google, and Microsoft are vital for this approach.

With AWS, the company is able to shorten the time required to advance drug candidates to clinical studies and create treatments that wouldn’t have been possible until a few years ago.

Prior to this stint, Microsoft was an early-stage funder of Cloud Pharmaceuticals, a drug company that was started in 2011 with technology developed by Duke University. Their tech platform, Quantum Molecular Design, uses a combination of AI, advanced quantum chemistry, and cloud computing to find out the best candidates for new small-molecule treatments.

Using Artificial Intelligence To Understand Human Protein-Folding
One of the oldest companies in the industry, Alphabet, is also using artificial intelligence to accelerate its drug development process. After acquiring the London-based startup DeepMind, Alphabet aims to tackle some of the most pressing real-world challenges that include slow drug development.

The DeepMind team uses artificial intelligence to understand protein folding, which guides almost every function of our bodies. When proteins become tangled and deformed, it has the potential to cause various diseases like diabetes, Parkinson’s, and Alzheimer’s. With accurate protein structure models, researchers can use practical applications of AI to speed up the processes to develop drugs for many such diseases.

In 2018, one of DeepMind’s products, AlphaFold, entered into a protein-folding competition. Researchers from all over the world were in the audience where teams predicted the structures of proteins from lists of specific amino acids, which were sent to the teams every few days over several months. AlphaFold defeated 97 other participants. AphaFold’s algorithm predicted the most accurate structure for 25 out of 43 proteins.

Predicting protein-folding is a complex process because the human body can produce billions of different proteins. Cloud computing’s capabilities are evident as it helps researchers and pharmaceutical companies to analyze and understand vast volumes of data to come up with new treatments.