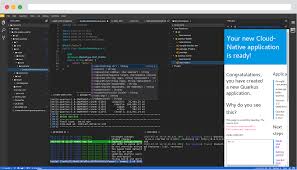 SAN FRANCISCO, Sept. 17, 2019 (GLOBE NEWSWIRE) — The Eclipse Foundation today announced at the Oracle Code One conference and tradeshow the release of Eclipse Che 7, the first developer workspace server and Integrated Development Environment (IDE) for creating cloud native, enterprise applications on Kubernetes. Che 7 greatly simplifies writing, building and collaborating on cloud native applications for teams by abstracting away many of the complexities of Kubernetes and closing the gap between development and production environments. The result is faster, safer development of Kubernetes applications.

“Eclipse Che 7 is the culmination of more than six years of community contributions, including more than 20 vendors, delivering a tremendous boost to the productivity of cloud native development on Kubernetes,” said Mike Milinkovich, executive director of the Eclipse Foundation. “As the world’s first Kubernetes-native IDE, Che 7 makes the developer and production environments the same on a scalable, collaborative, and secure platform specifically designed for building containerized applications.”

It is widely acknowledged that while Kubernetes is a fantastic system for operating applications at scale, it is a complex system that most developers do not yet fully understand. Che 7 allows the majority of developers who are not Kubernetes experts to contribute to cloud native application development immediately by taking care of the Kubernetes aspects of building and packaging their application for them. Adding new team members to a project is faster and easier because the developers’ environments are centrally hosted and share common runtime stacks and tools.

With support for deployment on a public Kubernetes cluster or an on-premises data center, Che 7 provides centrally hosted private developer workspaces that makes projects easy to share and easy to manage, but with enterprise-grade security. Che 7 comes with a pre-packaged web-based IDE, based on an extended version of Eclipse Theia to provide an in-browser Visual Studio Code experience.

Eclipse Che and Eclipse Theia are already integral to cloud native solutions from vendors such as Google, IBM and Broadcom, among others. It comprises the core of Red Hat CodeReady Workspaces, for example, a new development environment for Red Hat OpenShift.

“With Che 7, everything a cloud native developer needs — including the IDE, its plugins, and their dependencies —  is running as a Kubernetes application, so everything becomes repeatable and reproducible, whereas before development teams had to spend a non-trivial amount of time building and maintaining developer environments,” said Brad Micklea, vice president, Developer Tools and Programs, Red Hat. “Now, developers can more quickly spin up a development environment in Kubernetes that mirrors a production application and Che will take care of adding the development, build and debugging tools needed for them. Anyone, anytime, can contribute to a project without installing software, thus enabling faster application development from a more secure, centrally hosted environment.”

“We’re delighted to be part of the Eclipse Che community bringing a modern, open approach to the mainframe platform. Empowering developers with open source tools that deploy easily, facilitate on-boarding, and drive frictionless DevOps workflows across platforms is a cornerstone of our mainframe strategy. We look forward to supporting customers in their adoption of open source frameworks like Che and Zowe through CA Brightside that enable the mainframe to be an integral part of the digital world,” said Jean-Louis Vignaud, director, product management, DevOps and Open Mainframe at Broadcom.

“At Nuxeo, we have been using Eclipse Che 5 since its first days as our Developer Certification Platform,” said Arnaud Kervern, developer advocate at Nuxeo. “We’re currently migrating all of our internal services to Kubernetes. We’re seeing more and more activity spikes on our Developer Certification Platform so it seemed natural to move forward with Che 7 over Kubernetes to react faster to those scalability issues. With all the great new Che 7 features like Devfiles and Eclipse Theia IDE with Java Support, we’re already planning to create new improvements for our online customer experience on top of Che 7.”

The Eclipse Foundation is also showcasing Che 7 in booth #3228 at the Oracle Code One conference and tradeshow, taking place September 16-19 at Moscone Center in San Francisco.

Red Hat and OpenShift are trademarks or registered trademarks of Red Hat, Inc. or its subsidiaries in the U.S. and other countries. All other third-party trademarks mentioned are the property of their respective owners.