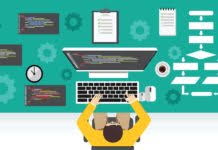 Source:-devclass.com
MongoDB’s CTO kicked off its London developer shindig by announcing it has open sourced its Compass GUI software to GitHub under its controversial Server Side Public License.

Compass is a GUI to allow its users to “explore and manipulate” data, and has been around since MongoDB 3.2. However, the company is looking to position itself as a data platform, not just as a database company, with more analytics out of the box – amongst other things. So, presumably open sourcing Compass should bolster this effort, as well as burnishing the firm’s open source credentials.

Co-founder and CTO Eliot Horowitz announced the move in a keynote speech which was mainly a recap of and progress report on the technology debuted at its global customer event earlier this summer, which was dominated by the release of MongoDB 4.2 and its Data Lake strategy.

Also new this week was the announcement that the vendor’s Terraform and Kubernetes integrations were now in general availability.Advertisement

That Compass has been made available under the SSPL suggests the company was not particularly moved by the outcry that greeted it last year. The SSPL is designed to prevent cloud service providers picking up the community edition of a product – such as MongoDB – and then offering it as a paid service.

The move led to MongoDB being bounced out of Red Hat’s Satellite platform, while MongoDB support was also dropped in RHEL 8.0.

But Sahir Azam, MongoDB’s svp for cloud products and GTM, told DevClass that when it came to customer reaction, there was “not as much as might be expected”. As for partners, he said most simply wanted to “clarify if it affects them at all.”

“We still fully believe in the principles of free and open software,” said Azam. “We open sourced Compass – you’ll see more of that from us.”

While the SSPL decision was seen as a reaction to AWS pushing its own service based on the Mongo open source technology, the two companies are still working closely on other projects.

The still in beta Atlas Data Lake offering is currently only available on AWS. Azure and Google Cloud flavours are in development, and Azam said these will appear “probably some time next year”.

He added that when it comes to Atlas, MongoDB’s cloud platform, it accounts for 37 per cent of its total revenues, and that is split amongst AWS, Azure and Google Cloud Platform, roughly in proportion to their overall market shares.

However, he added, the partnership with Google was “picking up a bit faster” and the search giant had been “going faster” in striking deals with open source companies.