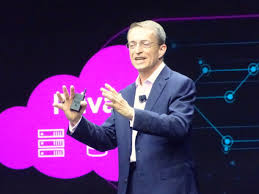 “We’re putting Kubernetes right into vSphere. We showed that on stage at VMWorld and gave demos of it — that’s coming very, very soon to the 600,000 vSphere customers that we have around the world,” said Dell in an interview with CRN. “It’s incredibly powerful to be able to manage virtual machines and Kubernetes clusters all from the same console and framework that all these customers are already use too.”

VMware recently unveiled Project Pacific which will untie vSphere and Kubernetes to create a platform for modern applications that offers consistency across all different environments. The new vSphere will empower operators and developers to accelerate innovation by converging containers and VMs into vSphere with native Kubernetes.

Robert Keblusek, chief technology officer for the fast-growing Illinois-based solution provider Sentinel Technologies, said vSphere with native Kubernetes will be a hit in the channel and be easily adopted by VMware customers.

[Related: Michael Dell On HPE GreenLake: ‘We’ll Let Our Share Speak For Itself’]

“One of the things that changes when people start down a cloud roadmap or a container roadmap is managing it. VMware has made a number of really nice acquisitions to help customers with that,” said Keblusek. “When you have 600,000 customers that are already comfortable and very used to managing their data center infrastructure on vSphere, if you extend that into options like containers, Kubernetes, cloud infrastructure – it just seems to be a natural extension and it’s easier for customers to adopt.”

Channel partners, he said, will be able to bring more offers to customers, drive net new sales and increase stickiness.

“We can bring more to our customers with a familiar set of tools and help them get to the next level without having to yank out everything they’re doing today with something completely new,” said Keblusek. “That will make it easier for us to help customers adopt these new solutions and maybe add some agility into their organization especially if they’re looking at things like DevOps and starting to leverage containers, moving toward infrastructure as code – those are all things that will become more easily attainable to the organization.”

VMware, which is part of Dell Technologies, has been investing hundreds of millions both organically and inorganically in Kubernetes R&D over the past 12 months.

In December 2018, VMware acquired Kubernetes star Heptio for $550 million. The startup was created in 2016 by two of the original creators of Kubernetes, Joe Beda and Craig McLuckie, who are both now part of VMware’s Kubernetes innovation engine. VMware is also slated to acquire DevOps specialist Pivotal Software, owner of the popular enterprise Kubernetes platform Pivotal Container Service (PSK).

Michael Dell said VMware’s acquisition of Pivotal, which also falls under the Dell Technologies umbrella, is nearing the finish line.

“Certainly the acquisition of Heptio, and now the acquisition of Pivotal — which will also close pretty soon — that just strengthens our capability,” said Dell. “We’ve had some of the new hires. We have two of the three original creators of Kubernetes working at VMware. The Dell Technologies Cloud and our infrastructure solutions are all very tightly integrated together with VMware based on VMware Cloud Foundation [and] what we’re doing with the Pivotal Container Service – all of that rides on vSphere.”

This week, Red Hat Kubernetes leader Grant Shipley left the company to join VMware as its new senior director of Kubernetes. Shipley was a pioneer for Red Hat’s Kubernetes OpenShift platform, spending a total of 14 years inside the company in a variety of top executive engineering and software development roles.

The centerpiece of VMware’s Kubernetes strategy is Tanzu, a portfolio of products and services that will enhance the current capabilities of VMware’s Pivotal Container Service. Tanzu has a cross-cloud Kubernetes management console called Tanzu Mission Control and will yield a fully native Kubernetes environment within vSphere. Tanzu is the onramp for PKS customers to broaden their abilities to build, run and manage containerized apps.

“Everything that Dell’s been doing with cloud, with Kubernetes and containers – they have a really strong story,” said Keblusek. “They’ve put together a nice packaging of offerings to make cloud adoption and hybrid cloud services much easier for customer to manage especially for hybrid cloud infrastructure. Whether customers are going to be doing traditional virtualization with full VMs or leveraging containers, automation, DevOps – the whole portfolio is coming together quite nicely.”