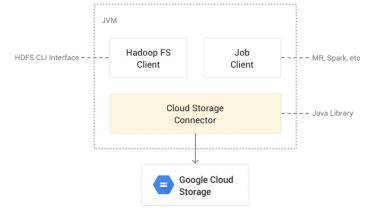 The latest version of the Cloud Storage Connector for Hadoop gives users increased throughput efficiency for columnar file formats such as Parquet and ORC and performance enhancements, like lower latency, increased parallelization, and intelligent defaults.

Significant cost reduction as compared to a long-running HDFS cluster with three replicas on persistent disks;

The Cloud Storage Connector’s source code is entirely open source and is supported by Google Cloud Platform (GCP). The connector comes pre-configured in Cloud Dataproc, GCP’s managed Hadoop and Spark offering. Though, it is easily installed and fully supported for use in other Hadoop distributions such as Hortonworks, MapR, and Cloudera. This makes it simple to move on-prem HDFS data to the cloud or burst workloads to GCP.

There are many performance optimizations and improvements in this Cloud Storage Connector release. For example: