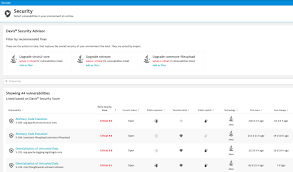 Dynatrace has added a security module to its observability platform that leverages its Davis artificial intelligence (AI) engine to automatically identify the software libraries and open source packages that represent the greatest security risk.

Ajay Gandhi, vice president of product marketing for Dynatrace, said the Davis Security Advisor, made available as part of the Dynatrace Application Security Module, makes it easier for IT teams understand which vulnerabilities need to be remediated first.

Davis Security Advisor aggregates vulnerability data in real-time and prioritizes remediation based on number of vulnerabilities, severity, impact to sensitive data, public exposure, how widely known the vulnerability is, and whether the code impacted is facing the Internet. That approach enables Davis Security Advisor to monitor all software libraries used in preproduction and production environments in a way that sharply reduces the number of false positives that would otherwise be generated, noted Gandhi.

As application environments become more complex—in part due to increased adoption of microservices that have lots of dependencies—it’s become impossible for IT teams to implement DevSecOps best practices in workflows without some form of AI augmentation, added Gandhi.

Making matter more challenging, many vulnerabilities are discovered after an application has been deployed. Developers don’t always have access to a software bill of materials that would make it easier to determine what libraries have been employed in what application or, for that matter, which libraries are dependent upon one another.

Gandhi said the Davis Security Advisor resolves that issue by employing machine learning algorithms, trained by Dynatrace, to identify those potential security issues. Once identified, the updates that need to be made can then be slipstreamed into a DevOps workflow.

Analyzing code for vulnerabilities is, of course, not a new idea. Training an AI model to perform that task on behalf of DevOps teams does promise to greatly accelerate the process at a time when organizations are under more pressure than ever to secure their software supply chains in the wake of a series of high-profile breaches.

It’s just not clear yet who inside organizations might drive adoption for AI platforms capable of identifying vulnerabilities in a way that helps prioritize remediation efforts. In some cases, cybersecurity teams have a vested interest in reducing the number of potential security incidents.

The one thing that is apparent is shipping insecure code faster only leads to more negative outcomes. There may not be such a thing as a ‘great’ application that happens to be insecure. Instead, the assumption will be that any application with known vulnerabilities, no matter how great, are too flawed to be deployed given all the security risks most businesses currently face.