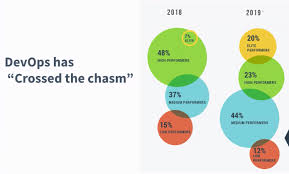 The performance figures for those at the sharp end of DevOps implementation goes up and up – and cloud usage is increasingly becoming a key differentiator.

That’s the primary finding from the DORA Accelerate State of DevOps 2019 report. The study, which was put together alongside Google Cloud, is a major piece of work, covering responses from more than 31,000 survey respondents tracking six years of research.

The proportion of highest performing users has almost tripled according to the research, comprising almost 20% of all times. What’s more, the highest performing teams were 24 times more likely than lower performers to be cloud specialists. This was based on executing across five specialisms of cloud computing based on NIST guidelines; on-demand self-service, broad network access, resource pooling, rapid elasticity, and measured service.

One aspect which needed to be considered was around change management. Perhaps not surprisingly, formal change management processes – for instance requiring approval from an external Change Approval Board – has led to a downturn in software delivery performance.

The report further argues that formal change approval processes – industry norms for years – do not aid stability. Research investigated whether a more formal approval process – in other words, fewer releases – was associated with lower change fail rates. Organisations naturally want to introduce additional processes if problems are encountered with software releases; yet this is a red herring, the report argues.

“Instead, organisations should shift left to peer review-based approval during the development process,” the report explains. “In addition to peer review, automation can be leveraged to detect, prevent, and correct bad changes much earlier in the delivery lifecycle. Techniques such as continuous testing, continuous integration, and comprehensive monitoring and observability provide early and automated detection, visibility, and fast feedback.”

Ultimately, the research gives a simple conclusion: slow and steady wins the race. “One thing is clear: a DevOps transformation is not a passive phenomenon,” the report notes. “No profiles report strong use of a ‘big band’ strategy – though low performers use this the most often – and that’s probably for the best.

“In our experience, this is an incredibly difficult model to execute and should only be attempted in the most dire of situations, when a ‘full reset’ is needed,” the report adds. “In the ‘big band’, everyone needs to be on board for the long haul, with resources dedicated for a multi-year journey. This may explain why this method is seen most often among our low performers.”