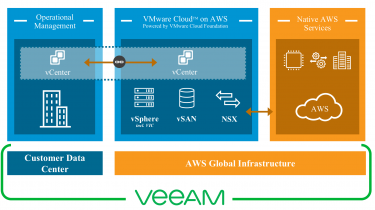 VMware customers can now run AWS’ Relational Database Service in their on-premises clusters, in a move that provides another option for hybrid cloud computing.

AWS has brought its widely used Relational Database Service to on-premises VMware deployments, in a move that strikes a blow at Oracle and broadens its push into hybrid cloud. It also gives VMware yet another avenue to remain relevant amid the coalescence of hyperscale public cloud vendors and rising interest in container-based workloads.

RDS on VMware gives DBAs tools to manage SQL-based relational databases on premises, much like they would with RDS in the AWS public cloud. It also provides functions such as backup, patching, replication and disaster recovery for database workloads.

AWS first announced plans for RDS on VMware in August 2018. It is now available for production use with support for Microsoft SQL Server, PostgreSQL and MySQL, AWS evangelist Jeff Barr said in a blog post.

Oracle’s database is conspicuously absent from the list. One possible reason why is Oracle’s licensing policy for deploying its products on VMware, which many customers find highly complex. Entire consultancies are in the business of helping customers maintain compliance with Oracle and VMware.

Moreover, AWS and Oracle have a long-running public feud, one that reached a crescendo this week with Amazon’s announcement that its consumer division had completed a years-long effort to migrate off Oracle databases.

AWS anticipates adding Oracle support in the future based on customer requests, an AWS spokeswoman said in an emailed statement.

Vendor rivalries aside, RDS on VMware is a big deal, according to Keith Townsend, co-founder of consulting firm The CTO Advisor in the Chicago area, and a former solutions architect at VMware.It’s a significant engineering effort with a ton of questions around ensuring performance and support.Keith TownsendCo-founder, CTO Advisor

“It’s a significant engineering effort, with a ton of questions around ensuring performance and support,” Townsend said. “I’m not clear on demand, but it’s a great opportunity to compete against Oracle, seeing Amazon is very public about their migration off Oracle to RDS.”

RDS on VMware far from turnkey

Barr’s blog post goes into the details of deploying RDS on VMware, but he also pointed readers to more comprehensive documentation, stressing that “the process is more involved than usual.”

The basic requirements include vSphere clusters that are on version 6.5 or higher and have outbound connections to the Internet. Customers must also make secure HTTP connections to AWS’s public endpoints.

Each cluster must contain a minimum of 24 vCPUs, 24 GiB of RAM and 180 GB of storage just for the on-premises management tooling for RDS on VMware. The on-premises database instances customers spin up will require additional resources, Barr said.

RDS on VMware is available for production use now in AWS’ U.S. East region. In its initial announcement last year, AWS had pledged to launch in its U.S. West, Tokyo and Frankfurt regions at well. It wasn’t immediately clear why the launch was scaled back, but one possible reason is a desire to let a limited number of customers test it in production first.

The offering also arrives before the expected general availability of AWS Outposts, which will replicate parts of AWS’ platform on-premises in specialized appliances designed and managed by AWS. Outposts, first announced in Nov. 2018, will likely debut at the re:Invent conference in December.

But it comes two years after the general availability of VMware Cloud on AWS, which forklifts VMware’s Cloud Foundation software stack onto AWS bare-metal infrastructure. This offering is sold as a managed service by VMware and has gained strong commercial success to date, according to VMware.

Last month, VMware and Oracle announced a partnership that has some similarities to as well as differences from VMware Cloud on AWS. Under this arrangement, Oracle will sell bundled SKUs of VMware software and Oracle Cloud Infrastructure to customers, but the emphasis will be on self-management of the environments.

VMware has also moved to embrace containers. Project Pacific, which was announced at VMworld in August, is an ambitious effort that seeks to embed the Kubernetes container orchestration platform into vSphere.