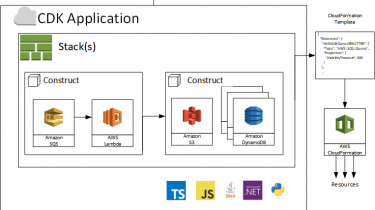 Recently, Amazon announced the general availability of the AWS Cloud Development Kit (CDK), an extensible open-source software development framework allowing developers to model and provision their cloud infrastructure using familiar programming languages. Last year, Amazon released a developer preview of the CDK to get developers on board and help drive the evolution of the framework. The preview release included support for TypeScript, JavaScript, and Java followed up with .NET and Python. The current GA release supports TypeScript and Python, and with these languages, developers can better define their cloud infrastructure than with YAML – which is just data-serialization language lacking capabilities of a programming language. As Danilo Poccia, evangelist at AWS, states in the blog post about the GA release of the CDK:

Personally I really like that by using the AWS CDK, you can build your application, including the infrastructure, in your IDE, using the same programming language and with the support of autocompletion and parameter suggestion that modern IDEs have built-in, without having to do a mental switch between one tool, or technology, and another.

Furthermore, administrators and developers can keep infrastructure and application code in the same repository – enhancing quality by making changes more predictable, having simpler continuous testing, and use the same tools to update applications and infrastructure.

The concept of AWS CDK is straightforward; everything is a construct – a cloud component that represents architectures of any complexity ranging from a single resource, such as an S3 bucket to a multi-stack application that spans multiple AWS accounts and regions. A developer or administrator can create constructs, use them in other constructs and thus compose a so-called stacks. Next, they can deploy stacks into an AWS environment, or apps, a collection of one or more stacks.

For creating and managing a CDK application, a developer or administrator can use the AWS CDK Command Line Interface (CLI), a command-line tool that requires Node.js. With this CLI, they can execute different commands such as:

By running cdk command, developers and administrators can see more of the available commands and options. Furthermore, they can include the CDK CLI in their deployment automation workflow, for example, by using Jenkins or AWS CodeBuild.

Developers and administrators can use the CDK without charge. Both TypeScript and Python versions of the SDK are now generally available, and the CDK is open source. Furthermore, examples of CDK projects are available on GitHub and further details in the documentation.