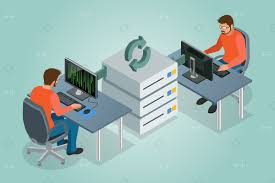 In 2018, 38 percent of infrastructure decision-makers that implemented DevOps and automated their continuous deployment and release automation efforts saw revenue growth of 10 percent or more from the prior year. In contrast, only 25 percent of those that had not adopted DevOps reported comparable growth, according to Forrester Research, Inc. Continuous integration and continuous delivery provide teams with faster feedback, higher confidence in code, and the agility that can give them the competitive advantage to win.

The overlooked reality is that implementing and managing a CI/CD platform for any reasonably sized organization can tally up to huge expenses in terms of the training, operations, and rollout. These costs exist whether you’re leveraging a SaaS, or running it yourself. There are several key factors to CI/CD implementation and management that will keep costs in check, and help teams optimize their software delivery, dramatically increasing the value they get out of CI. There are also some key strategies that will shorten the time to value for teams embarking on new or updated implementations of CI/CD pipelines.

Here are the hidden costs you need to watch out for, some tradeoffs worth thinking about, and how to mitigate common pitfalls to optimize your CI/CD expenditure.

Reduce people spend
DevOps teams are expensive, and often some of the most knowledgeable people in a company when it comes to the intricacies of your company’s software and infrastructure. Despite this wealth of knowledge, many of these specialists spend their days configuring delivery pipelines for other developers on the team to use. “When we’re talking about people spend, that’s obviously a very sensitive subject and so, I think the point here is really that it’s lovely to reallocate your people spend to the areas that it can have the most impact,” says Edward Webb, Director of Solutions Engineering at CircleCI. Find a CI/CD vendor that can abstract common operational concerns, so that these folks can be freed to work on higher leverage projects. Although your team might only have a few designated DevOps engineers, consider the opportunity costs of what they could be working on instead.

Reduce infrastructure spend
According to Webb, “Servers individually don’t cost a ton of money, but when you look at them in aggregate, having a large number of servers that run day in and day out over the course of days, months, and years, those actually add up to be pretty substantial.” If you have teams writing in multiple languages, or different versions of the same language, a common practice is to maintain separate servers running each language or language version. The result is that maintaining a large fleet of heterogeneous CI agents can be prohibitively expensive from a pure infrastructure cost perspective. Instead, consider running jobs within isolated containers, leveraging commodity compute power. This gives teams the ability to define exactly what languages and frameworks they need as they need them, without carrying the overhead of pre-provisioning the maximum number/variety of machines.  On top of the effort saved from maintaining a huge fleet of designated servers, you’ll also be able to run more work on fewer servers total, saving infrastructure costs.

Leverage SaaS intelligently
People talk about SaaS offerings and working in the cloud as being much more cost-effective, but that isn’t automatically the case. Webb points out, “Teams don’t end up seeing cost savings when they try to follow this paradigm of lift and shift. You can’t continue doing things the same way you’ve always done them, in the cloud, and save money. That means, in order to achieve the cost savings, you need to find ways to reinvest the people.” Organizations transitioning to the cloud should seize the opportunity to take a close look at their pipeline for wholesale opportunities for improvement, rather than just migrating a legacy setup to new infrastructure.

Increase agility and speed
By working with systems that shift the configuration tasks and provisioning away from specialized DevOps engineers to the developers working closest to the code, you’ll save infrastructure cost and optimize your people spend. This shift can be a huge cost savings, but it means that less specialized team members are taking on responsibility for operations. It will require a CI/CD platform that is intuitive to your application teams, and that limits the amount of product or domain-specific knowledge they must absorb to get started.  Finding a platform that leverages a simple configuration format like YAML or HCL over custom DSL can reduce this burden. Bonus points if you find a provider that lets teams replicate best practices and patterns through shareable configuration.

Once teams have the autonomy to update pipelines on their own, you will start to see a multiplier effect of increased agility, iteration, and responsiveness across the entire organization. You will have removed the bottlenecks to experimentation and making change, which means the team will learn faster in service of gaining a crucial competitive advantage.

While getting started with CI/CD can seem daunting, the benefit of implementing it is worth the effort. Ultimately, the biggest cost is the cost of not taking action; not doing anything at all.