At a High Level: AWS vs. Azure vs. Google Cloud 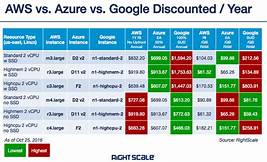 eWEEK RESOURCE PAGE: The three largest cloud computing vendors each have their own strengths and weaknesses that make them ideal for different workloads. Which one is best your your use case?

If you’ve got a business that’s growing and are looking for IT help in the form of cloud services, there are really only few household name-brand providers from which to choose. You already know them as Amazon Web Services, Microsoft Azure, Google Cloud, IBM Cloud … and that’s about it.

Certainly there are other good-quality companies in this ever-growing international mix, with names such as Alibaba, Salesforce, TenCent, Oracle, Dell EMC, Rackspace, Equinix and other Tier 2 and 3 players. But just because they’re not in the top four doesn’t mean they won’t be right for your business; in fact, smaller and more personal is what many enterprises prefer and seek out. This is sort of like “buying small” from the downtown merchants rather than heading to the mall and spending money with national chain stores.

This article will examine three of the top four at a high business level, and we’ll look closely at the other important players in the market at later dates. In no way are these characterizations 100 percent (or probably even 80 percent) true, but for now, to simplify the impact of the Big 3 in the market, think of them this way:

A small group of competitors is outpacing the market in general and slowly but surely growing their shares: IBM, Salesforce, Alibaba and Tencent. However, in aggregate, Amazon is still bigger than the first three combined (Azure owns about 16 percent of the market, Google 8 percent, about IBM 7 percent). Oracle, Rackspace and a slew of others are fighting to break out. We’ll take a close look at those players in a subsequent article.

Pricing is an Important Differentiator

One area where there is a notable difference between the two market leaders is in pricing. AWS uses a pay-as-you-go model and charges customers per hour—and they pay for a full hour, even if they use only one minute of it. Azure also follows a pay-as-you-go model, but it charges per minute—a way more exact pricing model than AWS. Google Cloud also follows a to-the-minute pricing process.

Many experts recommend that enterprises evaluate their public cloud needs on a case-by-case basis and match specific applications and workloads with the vendor that offers the best fit for their needs. Each of the leading vendors has particular strengths and weaknesses that make them a good choice for specific projects.

Let’s Start from the Beginning: What is AWS?

Amazon Web Services (AWS) is a cloud service platform from Amazon, which provides services in different domains such as compute, storage, delivery and other functionality which help the business to scale and grow. AWS utilizes these domains in the form of services, which can be used to create and deploy different types of applications in the cloud platform. These services are designed in such a way that they work with each other and produce a scalable and efficient outcome. AWS services are categorized into three types: infrastructure as a service (IaaS), software as a service (SaaS) and platform as a service (PaaS). AWS was launched in 2006 and become the most-purchased cloud platform among currently available cloud platforms. Cloud platforms offer various advantages such as management overhead reduction, cost minimization and many others.

AWS: Pros and Cons, Based on User Feedback

PROS: Amazon’s single biggest strength really turned out to be the fact that it was first to market in 2006 and didn’t have any serious competition for more than two years. It sustains this leadership by continuing to invest heavily in its data centers and solutions. This is why its dominates the public cloud market. Gartner Research reported in its Magic Quadrant for Cloud Infrastructure as a Service, Worldwide, that “AWS has been the market share leader in cloud IaaS for over 10 years.” Specifically, AWS has been the world leader for closer to 13 years, or ever since it first launched its S3 (Simple Storage Service) in fall 2006.

Part of the reason for its popularity is certainly the massive scope of its global operations. AWS has a huge and growing array of available services, as well as the most comprehensive network of worldwide data centers. Gartner has described AWS as “the most mature, enterprise-ready (cloud services) provider, with the deepest capabilities for governing a large number of users and resources.”

CONS: Cost and data access are Amazon’s weaknesses. While AWS regularly lowers its prices—in fact, it has lowered them more than 80 times in the last several years, which probably means they were too high to begin with—many enterprises find it difficult to understand the company’s cost structure. They also have a hard time managing these costs effectively when running a high volume of workloads on the service. And customers, beware: Be sure you understand the costs of extracting data and files once they are in AWS’s storage control. AWS will explain it all up front for you, but know that it’s a lot easier to start a process and upload files into the AWS cloud and access apps and services than to find data and files you need and move them to another server or storage array.

In general, however, these cons are outweighed by Amazon’s strengths, and organizations of all sizes continue to use AWS for a wide variety of workloads.

What is Microsoft Azure?

Azure is a cloud service platform designed and built by Microsoft and launched in 2010. It competes directly with AWS by providing services in domains such as compute, storage, database, networking, developer tools and other functionality which enables organizations to scale and grow their businesses. Azure services are categorized as platform as a service (PaaS), software as a service (SaaS) and infrastructure as a service (IaaS). They all can be used by developers and software employees to create, deploy and manage services and applications through the cloud. Services can include financial, human resources, scientific, retail, media and numerous other use cases. Azure, thanks largely to Microsoft’s deep and wide installed base of business applications throughout the world, has emerged fairly quickly as one of the largest and most successful commercial cloud service providers. It offers a wide range of integrated cloud services and functionalities, such as analytics, computing, networking, database, storage, mobile and web applications that seamlessly integrate with enterprise environments in order to achieve efficiency and scalability.

Azure: Pros and Cons, Based on User Feedback

PROS: Microsoft came late to the cloud market (in fact, four years after AWS) but gave itself a jump start by taking its popular on-premises business software–Windows Server, Office, SQL Server, Sharepoint, Dynamics Active Directory, .Net and others–and repurposing it for the cloud.

A big reason for Azure’s success is obvious: So many enterprises deploy Windows and other Microsoft software. Because Azure is tightly integrated with these other applications, enterprises that use a lot of Microsoft software often find that it also makes sense for them to use Azure. This builds loyalty for existing Microsoft customers. Also, if you are already an existing Microsoft enterprise customer, you can expect significant discounts off service contracts. Those are often non-trivial savings; just ask any CFO!

CONS:  Gartner has had some reservations about the makeup and design of the platform. “While Microsoft Azure is an enterprise-ready platform, Gartner clients report that the service experience feels less enterprise-ready than they expected, given Microsoft’s long history as an enterprise vendor,” the researcher said. “Customers cite issues with technical support, documentation, training and breadth of the ISV partner ecosystem.”

This doesn’t happen with all customers, but there are enough unsatisfied users that their objections must be taken into account.

What is Google Cloud?

Google Cloud Platform: Pros and Cons Based on User Feedback

PROS: You can count of Google’s engineering expertise. Google has an exemplary offering in application container deployments, since Google itself developed the Kubernetes app management standard that AWS and Azure now offer. GCP specializes in high-end computing offerings such as big data, analytics and machine learning. It also provides considerable scale-out options and data load balancing; Google knows what fast data centers require and offer fast response times in all of its solutions.

CONS: Google is a faraway third-place in market share, perhaps because it doesn’t offer as many different services and features as AWS and Azure. It also doesn’t have as many global data centers as AWS or Azure, although it is quickly expanding. Gartner said that its “clients typically choose GCP as a secondary provider rather than a strategic provider, though GCP is increasingly chosen as a strategic alternative to AWS by customers whose businesses compete with Amazon, and that are more open-source-centric or DevOps-centric, and thus are less well-aligned to Microsoft Azure.”

This is a high-level comparison of the three major cloud service leaders here in mid-2019. We will be updating this article with new information as it becomes available, and eWEEK will also be examining in closer detail the various services—computing, storage, networking and tools—that each vendor offers.