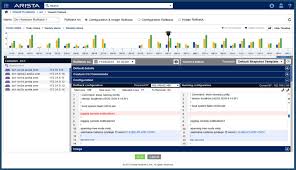 Arista today announced a bevy of upgrades to the company’s management plane software with its CloudVision 2019.

First launched in 2015, Arista’s CloudVision aims to enable software-based network provisioning and control that integrates with the company’s EOS network operating system. But rather than an SDN controller, CloudVision is positioned as a sort of go-between for exiting controllers from the likes of VMware and hardware running Arista’s EOS networking operating system.

Using CloudVision, all network elements — physical, virtual, cloud or containerized — stream telemetric data back to CloudVision’s data repository. Here, a digital replica of the network is created, thus enabling administrators to view the state of the network at any point of time and even roll back the network to a known good state in the event of a problem.

This information can then be leveraged by Arista’s partners like Microsoft Azure, VMware NSX, and Red Hat Ansible to enable even greater degrees of automation and network visibility.

According to Raymond, this approach is particularly valuable when dealing with intermittent issues like microbursts. These short bursts of high traffic can cause packet loss, but because they often occur between in between polling periods, they are difficult to detect.

Using CloudVision, a network administrator doesn’t have to wait for another microburst to hit and instead can track down the exact time and origin of the anomaly.

“Red Hat Ansible Automation is one of the leading DevOps platforms for infrastructure automation. When combined with Arista’s leadership in programmable network software, we are able to bring more agility to network operations and improve efficiency for our joint customers,” said Peter Sprygada, distinguished engineer at Red Hat, in a statement.

CloudVision 2019 and Ansible Playbooks for Cloud Vision are currently in customer trials and scheduled for general release in October.