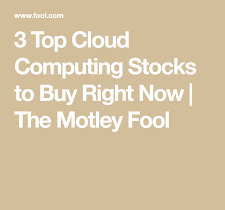 It’s important to remember, however, that there is much more to cloud computing than simply storage, including software-as-a-service (SaaS), platform-as-a-service, and more. This provides investors with a multitude of ways to profit from the accelerating move to the cloud.

With a large and growing list of cloud-native products and services, investors are looking for the best ways to capitalize on this opportunity and ride the increasing wave of cloud adoption. These three companies offer investors clear and ongoing opportunities to profit from the trend.

1. HubSpot: Rapidly expanding its suite of services
While it began life as an inbound marketing specialist, HubSpot (NYSE:HUBS) has quickly evolved and expanded its aspirations to become a one-stop-shop for customer relationship management (CRM).

The company has copied liberally from the successful template employed by salesforce.com, increasing its functionality with a series of successful, snap-on acquisitions. In fact, HubSpot has made five multi-billion-dollar acquisitions — as well as a multitude of smaller ones — over the past five years alone.

As a result of this platform expansion, HubSpot now provides marketing, sales, and service support, as well as content management and operations products. Each new offering has resulted in a growing market opportunity, with some estimates placing HubSpot’s total addressable market at about $20 billion. The company currently has roughly 114,000 customers, which pales in comparison to its total addressable market of more than 3 million small- and medium-sized businesses with a website.

The proof is in the pudding. During the first quarter, HubSpot delivered revenue that grew 41% year over year. Subscription revenue also climbed 41%, while professional services revenue jumped 43%. Additionally, the company’s total customer count grew by 45% and spending per customer was on par with the prior-year quarter.

These results aren’t a one-time thing, either. Since late 2014, HubSpot’s revenue has grown at a compound annual growth rate of 41%, while its international revenue has grown at 58%. At the same time, its margins have continued to expand and its free cash flow has rocketed higher.

The same graphics processing units (GPUs) that render lifelike images in video games also underpin the unique challenges presented by cloud computing. The secret is the parallel processing, or the ability to conduct a multitude of complicated mathematical calculations simultaneously, thereby reducing the amount of time necessary to complete complex tasks and speeding up the most complex algorithms.

Each of the world’s largest cloud providers depends on NVIDIA state-of-the-art processors to power their systems. Its customer list reads like a Who’s-Who of cloud providers. They include Amazon’s AWS, Alphabet’s Google Cloud, International Business Machines’ IBM Cloud, Microsoft’s Azure, and Alibaba Cloud, just to name a few.

Yet NVIDIA has just begun to tap this massive opportunity, as evidenced by its most recent results. In the first quarter, data center revenue — which includes cloud computing, data center, and artificial intelligence applications — grew 79% year over year, accounting for 36% of NVIDIA’s total sales. At the same time, its gaming segment, which represents the lion’s share of its revenue, grew 106%. Total revenue grew 84%, a remarkable feat for a company with a market cap of $436 billion — and this could be just the beginning.

NVIDIA generated revenue of $16.68 billion in 2020, which pales in comparison to the company’s total addressable market, which management estimates will reach $250 billion over the next few years.

3. DocuSign: Digital signatures are just the beginning
Many investors are familiar with DocuSign (NASDAQ:DOCU), which provides cloud-based tools to sign documents. The company is the undisputed leader in the electronic signature space, with a whopping 70% share of a market that continues to grow. What investors may not know is that e-signatures are just the beginning of a large and growing opportunity for DocuSign, a fact that CEO Dan Springer is quick to point out.

“Typically, e-signature is the first step that many customers take on their broader digital transformation journey with us,” said CEO Dan Springer on a recent earnings call. “So from a financial point of view, we believe this surge in e-signature adoption bodes well for future Agreement Cloud expansion.”

The Agreement Cloud is the next step in DocuSign’s evolution, providing a dozen software applications and more than 350 integrations designed to manage the entire lifecycle of contracts and agreements. For example, once a contract is signed, the system can trigger the creation of a bill. An agreement up for renewal? A reminder is generated. There are hundreds of similar use cases including employee on-boarding, non-disclosure agreements, change orders, new customer forms, vendor/supplier agreements, and much more.

The strategy is not only working, but the business is on fire. For DocuSign’s fiscal 2022 first quarter (ended April 30, 2021), revenue grew 58% year over year, accelerating from 39% growth in the prior-year quarter. Perhaps more importantly, subscription revenue grew at an even faster pace, up 61%. At the same time, billings — a sales growth metric that factors in changes in deferred subscription revenue — climbed 54%. Adjusted earnings per share (EPS) more than tripled.

DocuSign generated total revenue of $1.5 billion last year, but its remaining opportunity is vast. With the addition of the Agreement Cloud, DocuSign management estimates that its total addressable market has doubled to more than $50 billion, leaving a long runway for growth.

You get what you pay for
Each of these stocks has vastly outperformed the market over the past year, with no signs of slowing. Bears will be quick to point out that these stocks are by no means cheap when measured using traditional valuation metrics. HubSpot, NVIDIA, and DocuSign are currently selling for 23, 19, and 18 times sales, respectively — when a good price-to-sales ratio for a stock is generally between one and two.

That said, each of these cloud-native companies has a strong position within its industry and is riding the secular tailwind of cloud adoption to new heights. As a result, investors have thus far been willing to pay up for the impressive topline growth and the promise of explosive profits that each represents.

Our award-winning analyst team just revealed what they believe are the 10 best stocks for investors to buy right now… and NVIDIA Corporation wasn’t one of them.