3 Reasons Why DevOps Is More Popular Than Ever 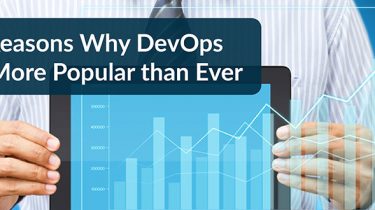 How popular is DevOps? More popular than ever, if Google Trends is to be believed. Here’s a look at how the popularity of DevOps has increased over time, and what has driven the change.
The Spiking Popularity of DevOps
Here’s what Google Trends tells us about interest over time of the term “DevOps” over the past 15 years:
And here’s the data for the same term over the past five years:
As you can see, talk about DevOps began circa 2010 and increased steadily thereafter. But it wasn’t until early 2019 the interest in DevOps sharply increased.
Granted, Google Trends is a crude, closed-source data source. And interest in DevOps as measured by Google is certainly not a straightforward representation of things such as the economic importance of DevOps or the influence of DevOps within programming communities specifically (as compared to within Google’s user base as a whole).
Why is DevOps More Popular Than Ever?
Still, I was surprised to see such a large and sudden spike in interest in DevOps starting early this year. I can’t think of any singular event that explains the trend. But I can think of several longer-term factors that, when added together, probably have been responsible for ushering in a world where more people than ever are talking about DevOps.
One is the fact that DevOps finally seems to have made its way into mainstream computer science and IT education. Here, I’m speaking a bit anecdotally. I’m not aware of any surveys of how many universities overall include DevOps in their curricula. But I can attest it is at least mentioned in some of the CS and IT courses at the technical university in the U.S. where I teach. To my knowledge, this was not the case just a few years ago.
What this means is the university is now graduating students who are already familiar with DevOps as they enter the workplace. They are spreading the gospel of DevOps to organizations that have not already heard it, and they are reinforcing it where it is already present.
Another factor at play, I think, is the market for DevOps tools has matured and consolidated. Even just five years ago, most companies talking seriously about DevOps were startups. Now, many of those startups have become hugely successful independent companies (such as Slack) or have been acquired (such as Wercker or Electric Cloud) by larger organizations.
To be sure, plenty of other DevOps startups have failed or stalled. But the fact that others have succeeded spectacularly has done much to drive continued interest in DevOps.
Last but not least, the tooling for DevOps has matured along with the market. Circa 2010, when the conversation about DevOps was getting started, it was much easier to talk about de-siloing your IT organization than it was to break down the silos in practice. At the time, DevOps-friendly collaboration tools had not yet gone mainstream. Release automation suites were also mostly limited to PaaS-style offerings whose features amounted primarily to automating deployments. They lacked the end-to-end integration, testing, building and management features of modern DevOps release tools. And many of the more advanced DevOps release platforms were built by startups, which made adopting them somewhat risky (because you could end up with a platform of a vendor that went out of business suddenly).
Today, in contrast, there is a litany of mature, feature-rich CI/CD tools to choose from—not to mention communication and collaboration solutions such as Slack and GitHub. It’s very easy to build a DevOps toolset, and you no longer have to rely on new, market-untested solutions to do so. This fact, too, has helped make DevOps more popular than ever.
How will the popularity of DevOps change from here? My guess is it will continue to rise as the market and DevOps tooling mature even more, and as DevOps continues to make its way into mainstream educational programs.
0 0 votes
Article Rating
Subscribe
Login