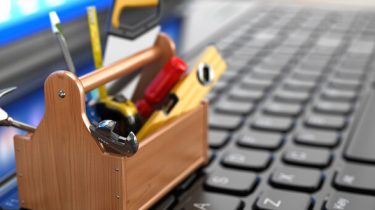 DevOps isn’t just a cultural shift — it requires great tools to come to fruition. Below, we’ve pulled together a list of some of the most well-loved DevOps tools available today. But, throwing loads of money into fancy SaaS solutions can quickly gobble up the cloud budget. These DevOps tools all are open source, and enable everything from container builds and orchestration to microservices networking, configuration management, CI/CD automation, full-stack monitoring and more. Here are some of our favorite open source DevOps tools for 2021.

1. Kubernetes
With the ubiquity of microservices and container-based software, it’s no surprise that Kubernetes tops this year’s list of open source DevOps tools. Kubernetes, adoption of which rose by 48% in 2020, is used to orchestrate containers. Instead of releasing microservices manually, Kubernetes can automate deployment, maintenance and scaling of groups of containers in production. Kubernetes, sometimes written as K8s, is hosted by the Cloud-Native Computing Foundation (CNCF).

2. Docker
Docker, the software, is a free and open source platform used to build, ship and run an application as a lightweight container. Containers package up the binaries, libraries, configuration files and dependencies required for a program to run. Over the past decade, containers have played a key role in agile development, and Docker containers led the revolution. At its core is the Docker Engine. Docker Hub is also an excellent resource for finding and sharing prepackaged functions as containers. Also, to plug container vulnerabilities, it may be helpful to use open source container auditing tools like Docker Bench or Anchore.

3. Istio
Microservices are a handy development style, yet they bring new development and architecture concerns. Namely, how do we apply networking policies like security, encryption, observability and telemetry elements consistently across all our services? Well, service mesh is one answer. Service mesh places a sidecar proxy next to each container and abstracts these networking capabilities to a control plane. Istio is one such open source service mesh that has seen widespread adoption. Istio is built on Envoy, opening it up to plugins and extensibility options. We should also mention Linkerd and Kuma as viable open source service mesh alternatives.

4. GitHub Actions
GitHub is arguably the most popular source control and software collaboration platform on the planet. The GitHub platform itself, based on Git, has seen some significant updates in the past few years. Most notable is the GitHub Actions capability. GitHub Actions enable software packages hosted on GitHub to accept inputs and trigger other processes. This could help automate some cool DevOps workflows within GitHub, such as code reviews, branch management or CI/CD processes — the combinations of possibilities here are endless. GitHub Actions are, essentially, YAML files hosted in GitHub repositories that leverage GitHub webhooks. Though this is more of a feature than an open-source tool, we feel it’s important to include here. Actions is free for public repositories with a limit of 100 actions.

5. Jenkins
A big part of the DevOps philosophy is finding ways to automate and deploy new iterations more efficiently. Part of this goal is creating a streamlined continuous integration and continuous delivery (CI/CD) pipeline. Jenkins is an open source automation server with hundreds of plugins to automate the building, deployment and testing of software projects. Although GitHub Actions could theoretically replace a CI server in the future, CI tools like Jenkins, CircleCI, TravisCI and GitLab Community Edition still are preferred by many DevOps teams.

6. Prometheus
Metrics and alerting systems are crucial for site reliability engineers to visualize applications and react to issues. Prometheus, a graduated CNCF project, is a well-loved open source monitoring solution. A Prometheus server collects time-series metrics by scraping HTTP endpoints and generates a system to interact with this data, offering deep querying, visualization, storage and other capabilities. Check out this Awesome Prometheus list for Prometheus introductions and additional resources.

7. Ansible
Ansible is all about automation. Ansible, an open source project sponsored by Red Hat, can be used to automate things like cloud provisioning, networking, deployment, configuration management and other tasks. Ansible has a simple yet effective architecture that is relatively easy to assemble — all you need is a text editor and command line. You describe your infrastructure in a text document and organize your desired states in a playbook. For an example in practice, see how OpenIO uses Ansible. “Ansible is our standard tool not only to deploy the OpenIO core, but also our WebUI, OIO-FS and all upcoming options,” writes Cédric Delgehier, Ops at OpenIO.

8. Chef
Chef is another infrastructure-as-code (IaC) solution for automating your configuration management. Chef uses Ruby to automate server configurations and works well with all major cloud service providers (CSPs). This can be very useful when creating and provisioning large quantities of machines. Like other automation tools on this list, the user describes their components and their states in a declarative format. In Chef, these are known as “recipes,” which can be grouped together into “cookbooks.” You can’t diss Chef for not being on-theme!

9. Terraform
Terraform is another IaC tool that can be used for initiation of building, versioning and further automation using configuration files. “Terraform is a tool for building, changing and versioning infrastructure safely and efficiently,” as it is described on GitHub. Terraform follows an “execution plan” that a user creates with high-level syntax. One unique aspect of Terraform is its emphasis on versioning — this allows you to version the blueprint of your service just as you would your software.

11. ELK Stack
ELK Stack is the union of three open source projects maintained by Elastic: Elasticsearch, Logstash and Kibana. With these three components, developers can take in and log data from any source and create helpful visualizations. This centralized logging is enabled with a NoSQL database for storage with Elasticsearch, processing and data collection with Logstash and visualization with Kibana. Increased visibility is vital for data analysis and helps identify errors to reduce mean time to recovery (MTTR).

Rounding Out The DevOps Toolchain for 2021
Programming isn’t only about shipping quality code, it’s about efficient execution. This drive to improve operations across the board is truly putting Ops into everything. With awesome open source DevOps tooling, it means more and more architects can adopt a DevOps approach within their deployment models.

DevOps as a practice, as well as its underlying technology, is always evolving. In 2021, a lot of effort is being placed on wrangling the effects of introducing a microservices development style. We’ve noticed the maturation of container orchestrators and service mesh, as a result. Blueprinting infrastructure-as-code and creating automated, repeatable configurations is another must-have for implementing automated build and release pipelines. Not to mention, many no-code and low-code platforms are opening up DevOps capabilities to non-programmers, albeit from a proprietary perspective.

It’s also helpful to note that some popular open source DevOps tools have been acquired — like Docker and Chef — blurring the lines between their business and their open source roots. When it comes to open source tools, it’s a good practice to adopt vendor-neutral tools with solid community support representing diverse stakeholders. This will help future-proof your project. Even though open source is “free,” users must ensure the benefits outweigh the time-to-onboard as well as the operational overhead of self-hosting.

DevOps tools are beneficial to automate software deployment. Here, we’ve attempted to list some of the most exciting tools to help automate that process. Of course, many new tools are emerging in the DevOps space, and we have hardly scratched the surface. Do you have a favorite DevOps tool that’s not mentioned above? Let us know in the comments below!